Le Monde: In Africa, the coronavirus does the business of home delivery platforms 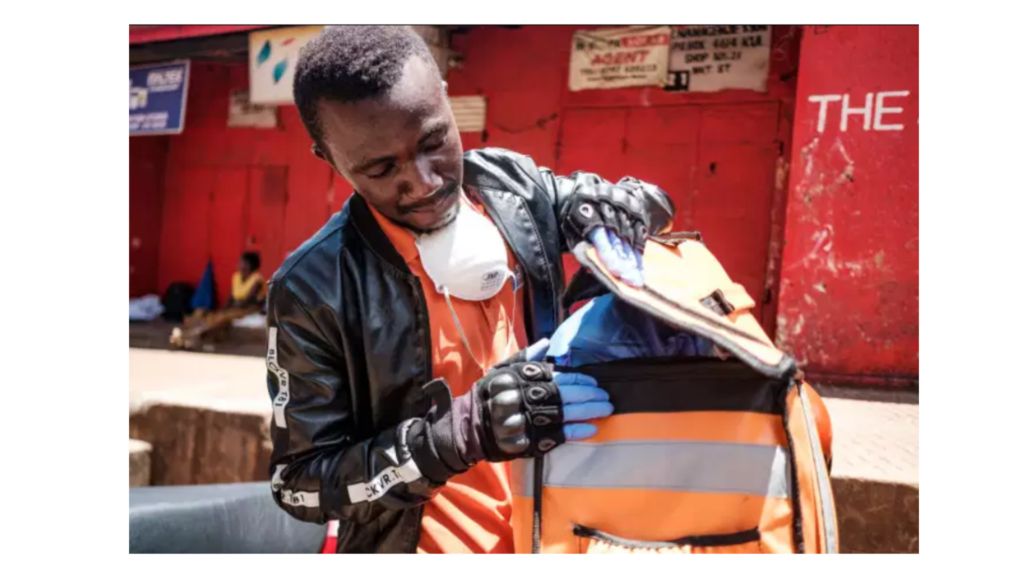 While many countries have restricted travel and store opening, some online retailers are seeing their orders explode.
Seydou Sall sprinkles antiseptic on the bags of food just dropped off at his home by one of these deliveries and online trading companies whose Covid-19 is boosting sales here in Dakar, as elsewhere in Africa. Sugar, milk, coffee, dates, cheese … This researcher from the business world, who lives in an upscale district of the capital of Senegal, relies on e-commerce, like a number of consumers who seem to be growing as a result of the pandemic.

“Home delivery allows me to avoid contacts and queues. In three clicks, I have my order and I only pay 2,000 CFA francs “, or 3 euros, for delivery, he says, mask on the face. The Senegalese authorities have restricted travel and the opening of markets and businesses. Add to that the fear of contagion and Seydou Sall entrusted its supply to Rapidos. The platform ensures doing business.

“Rapidos was created two years ago as a delivery site,” explains one of its managers, Mohamed Badiane. With the coronavirus and the difficulties of getting around, an online sales platform has been added, in partnership with supermarkets, bakeries, operators of products such as fruits and vegetables or meat. “Since then,” home deliveries have increased by 90%, mainly products related to Ramadan such as sugar, dates, and milk. “

While the epidemic has not caused the dreaded devastation in Africa, the continent is not immune to the grim predictions of the impact it will have on economies. The closure of the markets, so important on the continent, and the constraints imposed on the flow of goods and people have severely affected the retail trade. But as far as online commerce is concerned, testimonies gathered by Agence France-Presse (AFP) from operators suggest that the Senegalese Rapidos is anything but an isolated case.

However, the apparent lack of studies or specific data calls for caution as to the profitability or sustainability of the phenomenon, in an African context complicated for this activity.

Jumia, a giant in the sector in Africa, is experiencing in Côte d’Ivoire an “explosion of orders for supermarkets, food and hygiene products”, says its general manager in the country, Francis Dufay. The orders are three times what they normally are, he says. In South Africa, which competes with Nigeria for the leading African economy, OneCart, which supplies food and pharmaceutical products, claims a “500% increase” in its activities, which has had to be adapted by increasing the capabilities, says Lynton Peters, co-founder.

Online commerce was already progressing significantly in Africa with the advancement of the Internet, the development of the middle class, urbanization, and the youth of the population while remaining far from what it represents elsewhere in the world.

The United Nations Conference on Trade and Development (UNCTD) estimated at the end of 2018 at least 21 million the number of online buyers in Africa in 2017. This is less than 2% of the world’s total, while the share of the population is estimated at around 17% of that of the planet. Half of these consumers were concentrated in Nigeria, South Africa, and Kenya. The number of buyers has increased each year by 18% since 2014, faster than the world average of 12%, but online commerce was less than 0.5% of African GDP, far from the world average of more than 4%, noted the UNCTD.

“Everyone has become a cook”

E-commerce in Africa attracts investors. But they must overcome considerable obstacles: less access to the Internet, the limited purchasing power of the middle class, poor infrastructure, mistrust of online payments, and, by contrast, the pre-eminence of markets and cash transactions. With the shortcomings in the naming of the streets, transporting the goods to their destination is a challenge. Major players like Amazon are staying away from e-commerce in Africa. Others adapt their practices to the environment. Jumia has developed a whole fleet of deliverers but struggles to make a profit.

The Covid-19 has made it possible to capture more long-term customers and to “fish” new ones, operators say. “The fact that people can’t get out has increased awareness and curiosity about our online sales and delivery services,” says Jerobeam Pengevally Mwedihanga, owner of Tambula Online Shop, a food retail site in Namibia. “We have the impression that we have succeeded in gaining the loyalty of customers who have discovered e-commerce,” agrees Mr. Dufay, at Jumia.

The medal has its downside, depending on the country, the severity of the containment measures or the products sold. The coronavirus was “a big blow” for restoration orders, says Maguelonne Biau, managing director of Glovo in Côte d’Ivoire, where the company employs around 400 delivery people. “Our supermarket activity has increased, but we cannot say that it compensates. We drew a line under everything that was a restaurant with the curfew, ”she said. People staying at home, “everyone has become a cook,” says Salmi Shigwedha, owner of Garden Inn, a meal delivery platform in Namibia.

Jumia Adding Food-Delivery Service in Egypt
Hima Cement Partners with Jumia Uganda to Drive Convenience for the Customer
How This Unicorn Made It In Africa: ‘Technology Has The Potential To Transform Everyday Life On The Continent’
Zipline and Jumia join forces to pioneer drone delivery of thousands of products to homes across Africa